Changes in consumer prices can be observed in economic statistics compiled in most nations by comparing changes in a basket of diverse goods and products to an index. In the U.S. the Consumer Price Index (CPI) is the most commonly referenced index for evaluating inflation rates. When the index in one period is lower than in the previous period, the general level of prices has declined, indicating that the economy is experiencing deflation.

This general decrease in prices is a good thing because it gives consumers greater purchasing power. To some degree, moderate drops in certain products, such as food or energy, even have some positive effect on increasing nominal consumer spending. Beyond these basic staples, a general, persistent fall in all prices not only allows people to consume more but can promote economic growth and stability by enhancing the function of money as a store of value and encouraging real saving.

However, under certain circumstances, rapid deflation can be associated with a short-term contraction of economic activity. In general, this can occur when an economy is heavily laden with debt and dependent on the continuous expansion of the supply of credit to inflate asset prices by financing speculative investment, and subsequently when the volume of credit contracts, asset prices fall, and speculative over-investments are liquidated.

This process is sometimes known as debt deflation. Otherwise, deflation is normally a positive feature of a healthy, growing economy that reflects technological progress, increasing abundance, and rising standards of living.

If, as the common saying goes, inflation is the result of too much money chasing not enough goods in the economy, then conversely deflation can be understood as a growing supply of goods and services being chased by a constant or slower-growing supply of money.

This means that deflation can be brought about either by an increase in the supply of goods and services or by a lack of increase (or decrease) in the supply of money and credit. In either case, if prices can adjust downward, then this results in a generally falling price level.

An increase in the supply of goods and services in an economy typically results from technological progress, the discovery of new resources, or an increase in productivity.

Consumer’s purchasing power increases over time and their living standards rise as the increasing value of their wages and business incomes allow them to purchase, use, and consume more and better quality goods and services. This is an unambiguously positive process for the economy and society as a whole.

The U.S. government targets an annual inflation rate of 2%.

At times, some economists have expressed fears that falling prices would paradoxically reduce consumption by inducing consumers to hold out or delay purchases in order to pay lower prices in the future; however, there is little evidence that this actually occurs during normal periods of economic growth accompanied by falling prices due to improvements in productivity, technology, or resource availability.

Moreover, the vast majority of consumption is made up of goods and services that are not easily deferred to the future even if consumers wanted to, such as food, clothing, housing services, transportation, and healthcare.

Beyond these basic needs, even for luxury and discretionary spending consumers would only choose to reduce current spending if they expect the rate of decrease in prices to outweigh their natural time preference for present consumption over future consumption.

The one type of consumer spending that would suffer from falling prices would be items that are routinely financed by taking on large debts since the real value of fixed debt will increase over time as prices fall.

Under specific conditions, deflation can also occur in and after periods of economic crisis.

In a highly financialized economy, where a central bank, another monetary authority, or the banking system, in general, engages in the continuous expansion of the supply of money and credit in the economy, the reliance on newly created credit to finance business operations, consumer spending, and financial speculation, results in ongoing inflation in commodity prices, rents, wages, consumer prices, and asset prices.

More and more investment activity starts to take the form of speculation on the price appreciation of financial and other assets, rather than profit and dividend payments on fundamentally sound economic activity.

Business activities tend likewise to depend more and more on the circulation and turnover of newly created credit rather than real savings to finance ongoing operations. Consumers also come to finance more and more of their spending by borrowing heavily rather than self-financing out of ongoing savings.

To compound the problem, this inflationary process usually involves the suppression of market interest rates, which distorts decisions about the type and time horizon of business investment projects themselves, beyond simply how they are financed. Conditions become ripe for debt deflation to set in at the first sign of trouble.

At that point, either a real economic shock or a correction in market interest rates can put pressure on heavily indebted businesses, consumers, and investment speculators. Some of them have trouble revolving, refinancing, or making their payments on various debt obligations such as business loans, mortgages, car loans, student loans, and credit cards.

The resulting delinquencies and defaults lead to debt liquidation and write-downs of bad debts by lenders, which start to eat away some of the accumulated supply of circulating credit in the economy.

Banks' balance sheets become shakier, and depositors may seek to withdraw their funds as cash in case the bank fails. A bank run may ensue, whereby banks have over extended loans and liabilities against inadequate cash reserves and the bank can no longer meet its own obligations. Financial institutions begin to collapse, removing liquidity that indebted borrowers have become even more desperate for.

This reduction in the supply of money and credit then reduces the ability of consumers, businesses, and speculative investors to continue to borrow and bid up asset and consumer goods prices, so that prices may stop rising or even begin to fall.

In the near term this process of debt deflation involves a wave of business failures, personal bankruptcies, and increasing unemployment. The economy experiences a recession and economic output slows as debt-financed consumption and investment drop.

What Is Deflation in an Economy?

Deflation is when the prices of goods and services decrease across the entire economy, increasing the purchasing power of consumers. It is the opposite of inflation and can be considered bad for a nation as it can signal a downturn in an economy, leading to a recession or depression. Deflation can also be brought about by positive factors, such as improvements in technology.

Is Deflation Worse Than Inflation?

How Do You Make Money During Deflation?

To hedge against deflation, investors can purchase investment-grade bonds, consumer-staple stocks, dividend stocks, and keep their money in cash. A diversified portfolio can protect against a variety of economic scenarios.

A little bit of deflation is a product of, and good for, economic growth. But, in the case of an economy-wide, central bank fueled debt bubble followed by debt deflation when the bubble bursts, rapidly falling prices can go hand-in-hand with a financial crisis and recession.

Thankfully, the period of debt deflation and recession that follows is temporary and can be avoided entirely if the perennial temptation to inflate the supply of money and credit in the first place can be resisted.

All in all, it is not deflation, but the inflationary period that then leads to debt deflation that is dangerous for a country's economy. Perhaps, unfortunately, consistent and repeated inflation of this kind of debt bubble by central banks has become the norm over the past century or so.

At the end of the day this means that while these policies persist, deflation will continue to be associated with the damage they cause to the economy.

Compare Accounts
×
The offers that appear in this table are from partnerships from which Investopedia receives compensation. This compensation may impact how and where listings appear. Investopedia does not include all offers available in the marketplace.
Provider
Name
Description
Part Of
Guide to Economic Recession
Related Articles

How Do Asset Bubbles Cause Recessions? 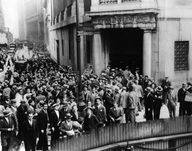 Were There Any Periods of Major Deflation in U.S. History?

How the Federal Reserve Fights Recessions

Does Inflation Favor Lenders or Borrowers?

Are Economic Recessions Inevitable?
Partner Links
Related Terms
Deflation
Deflation is the decline in prices for goods and services that happens when the inflation rate dips below 0%.
more
Inflation: What It Is, How It Can Be Controlled, and Extreme Examples
Inflation is a decrease in the purchasing power of money, reflected in a general increase in the prices of goods and services in an economy.
more
Purchasing Power Definition
Purchasing power is the value of a currency in terms of the goods or services one unit of it can buy. Discover how purchasing power impacts investors.
more
GDP Price Deflator Definition
The GDP price deflator measures the changes in prices for all of the goods and services produced in an economy.
more
Real Income Definition
Real income, also known as real wage, is how much money an individual or entity makes after accounting for inflation.
more
What Is Hyperinflation?
Hyperinflation describes rapid and out-of-control price increases in an economy. In this article, we explore the causes and impact of hyperinflation.
more